"Leipzig vor dem Schlaf" by Philipp used under CC BY 2.0 / Cropped from original

Leipzig is the largest city in the federal state of Saxony and rated as the most liveable city in Germany. An educational, infrastructural, cultural and economic centre today, it has been a trade city since at least the time of the Holy Roman Empire, and has played a significant role in instigating the fall of communism in Eastern Europe. Since the reunification of Germany, it has undergone significant restoration and modernisation. Several joint urban regeneration projects were done with Birmingham Urban Planners: most notably, Leipzig’s canal regeneration projects were a result of collaboration between the two city planning departments.

Leipzig is also a university city and boasts many renowned research institutions, including three Max Planck institutes. It is often labelled ‘City of Books’ due to its historical significance as a centre for printing and book trading. This legacy is still visible in numerous museums, exhibitions, the German National Library and the famous Leipzig Book Fair, the second largest of its kind in Germany.

25 years of partnership between Birmingham and Leipzig

Birmingham and Leipzig started their partnership in 1992, three years after the fall of the Berlin Wall. Initially co-operation was focused on supporting Leipzig’s economic regeneration and several large projects were successfully implemented with the help of Birmingham’s Planning Department. Today, we are working together on EU Cohesion policy in the EUROCITIES programme that Birmingham is co-chairing this year. We are also continuously exploring cultural and artistic exchange opportunities between the two cities: One of the highlights was Stan’s Cafe collaboration with „Theater der Jungen Welt Leipzig“. In October 2006, “Of All The People In All The World” moved to Leipzig for 4 days.

In September 2014, Birmingham was officially invited to a “Fair Trade Conference” in Leipzig, where representatives of the Birmingham City Council took part in a panel discussion labelled “How fair is fair trade?”.

The city of Birmingham was represented at the “EatEatEat – Küche und Kultur International” in 2015, where the traditional English dish Fish and Chips was served and live music was played. In the same year in October, the Leipzig Gewandhaus Orchestra performed at Birmingham’s grand Symphony Hall theatre.

Teams from Leipzig have also been taking part in the European Twin Cities Cup in 2015 and 2016.

In addition to continuous representation of the partnership in both cities, Birmingham and Leipzig also work together closely in education and research: the Leipzig GaraGe GmbH and Birmingham Thinktank have been co-operating with each other since 2002.

One aspect about the partnership between Leipzig and Birmingham is the significance of youngsters. Apart from annual theatre and art projects, adolescents have been involved in planning urban renewal. (i.e. collaboration between „Kinderbüro Leipzig e. V.“ And Youth Focus Group Birmingham or „Jugendkulturzentrum Stötteritzer Spielkiste” and Midland Arts Centre)

In 2015, Leipzig artist Sven Bergelt was in Birmingham as a guest and had an exhibition in September, after Birmingham artist Ian Richards spent some time in Leipzig in May the same year.

This year, we are celebrating our 25th anniversary of partnership. On the 19th and 20th of October, the Mayor of Leipzig, Burkhard Jung, visited Birmingham with a delegation to mark the occasion and discuss opportunities for future collaboration. Our new three-year programme of partnership will focus on culture and arts, civic exchange, business, health and education.

As part of the Mayor’s visit, officials and dignitaries representing policy areas from culture to business gathered at a collaborative event hosted by Innovation Birmingham to develop new ways of driving growth and innovation for small to medium-sized enterprises (SMEs). Discussion focused on maximising collaboration of business incubators and accelerators and exploring exchange opportunities based on the thriving support networks that exist in both cities. Keynote addresses were delivered by the Mayor of Leipzig Burkhard Jung and CEO of Innovation Birmingham Dr David Hardman, as well as by Lloyd Broad, Head of European and International Affairs at Birmingham City Council.

Axel Kullick, International Market Development Manager at Invest Region Leipzig, said: “I look forward to working with the city of Birmingham further to provide international opportunities for small to medium-sized enterprises in both cities, stimulate growth and develop what is already a successful international relationship.”

Cliff Dennett, Head of Business Development at Innovation Birmingham, stressed the importance of collaboration and communication to maintaining successful business relationships, and said: “A clear emphasis was placed on creating a better future for both regions, driving innovation and small business growth.” 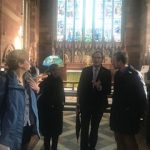 During a tour of the city centre the Mayor of Leipzig, his wife and Leipzig officials visit St Martin in the Bullring, where the first beginnings of our city partnership developed 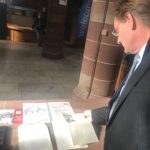 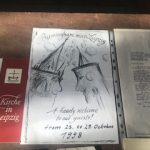 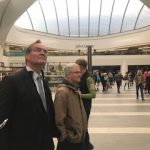 Mayor Jung and officials during a visit to New Street Station 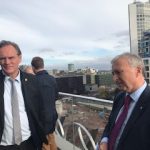 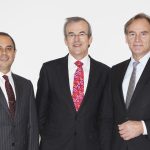 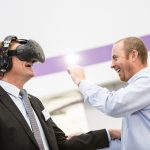 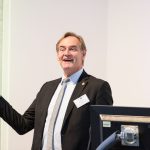 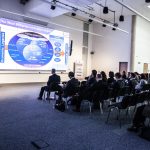 David Hardman, the CEO of Innovation Birmingham, during his keynote speech. (Image by Laura Peters) 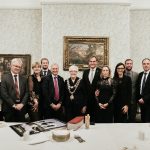 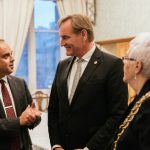 The Mayor of Leipzig speaking to Lloyd Broad, Head of European and International Affairs at Birmingham City Council (left) and the Lord Mayor of Birmingham, Cllr Anne Underwood, at a civic reception (Image by Ed Lawes) 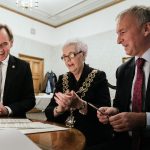 The leaders of both cities signed a memorandum of understanding to renew the partnership agreement made 25 years ago. Left to right: Burkhard Jung, Mayor of Leipzig; Cllr Anne Underwood, Lord Mayor of Birmingham; Cllr Ian Ward, Interim Leader of the Council (Image by Ed Lawes) 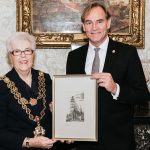 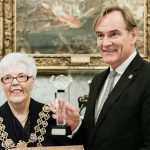 Birmingham’s gift to Leipzig: a glass handshake to commemorate 25 years of partnership (Image by Ed Lawes) 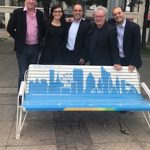 During a visit to Leipzig, members of the Birmingham delegation pose with the ‘Birmingham bench’ in Leipzig 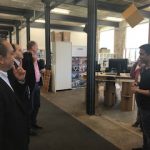 The Birmingham delegation visits SpinLab, an accelerator supporting the growth and creation of start-ups and innovative businesses 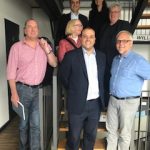 There was also a visit to Social Impact Lab, a Leipzig incubator for social innovation 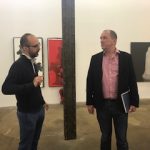 Simon Easton speaking with Michael from Halle 14, arts centre and gallery in Leipzig 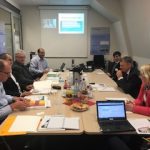 Another meeting took place between representatives of Birmingham City University and Leipzig’s Fraunhofer, one of Europe’s best-known applied research organisations