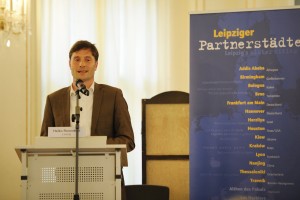 Birmingham City Council representative took part in a panel discussion on Fair Trade entitled “How Fair is Fair Trade?” in Leipzig, Germany. We were officially invited by our partner city Leipzig. Other participants included representatives of Lyon, another Birmingham’s partner city.

The event’s key point was a panel discussion on Fair Trade. Birmingham presentation included Fair Trade’s history and its significance in the UK, the role of Fair Trade shops in the UK and people’s perceptions of Fair Trade. We also had a chance to outline how Fair Trade is organised in Birmingham and give examples of good practice. This included a presentation on the Big Green Lunch, an annual event that took place in June this year in the Birmingham Botanical Gardens promoting ethical and Fair Trade goods.