The Midlands chapter of the British-American Business Council (part of Greater Birmingham Chambers of Commerce) has named Professor Julian Beer as its new president. The deputy vice chancellor of Birmingham City University is succeeding Harry Reilly who is now honorary chairman of BABC Midlands. 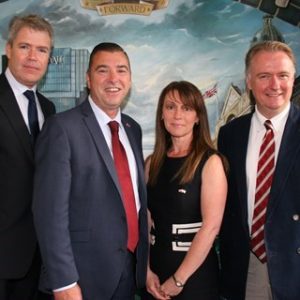 Professor Beer said:  “I am delighted to take up this position in what will be a crucial time post Brexit for transatlantic trade and investment for the Midlands and indeed, for the nation as a whole.”

Mandy Haque said: “Having worked with the team and benefited from the council’s excellent services for a number of years through Birmingham Airport, I look forward to passing on my knowledge and experience gained from a business reliant on transatlantic trade, and help strengthen ties across the pond even further.”

Outgoing president Harry Reilly added: “I am delighted to welcome and support the new leadership team.

“They are both fully committed to the aims of BABC with respect to transatlantic trade and investment and have excellent experience and contacts to develop relationships with and opportunities in North America for BABC members.”