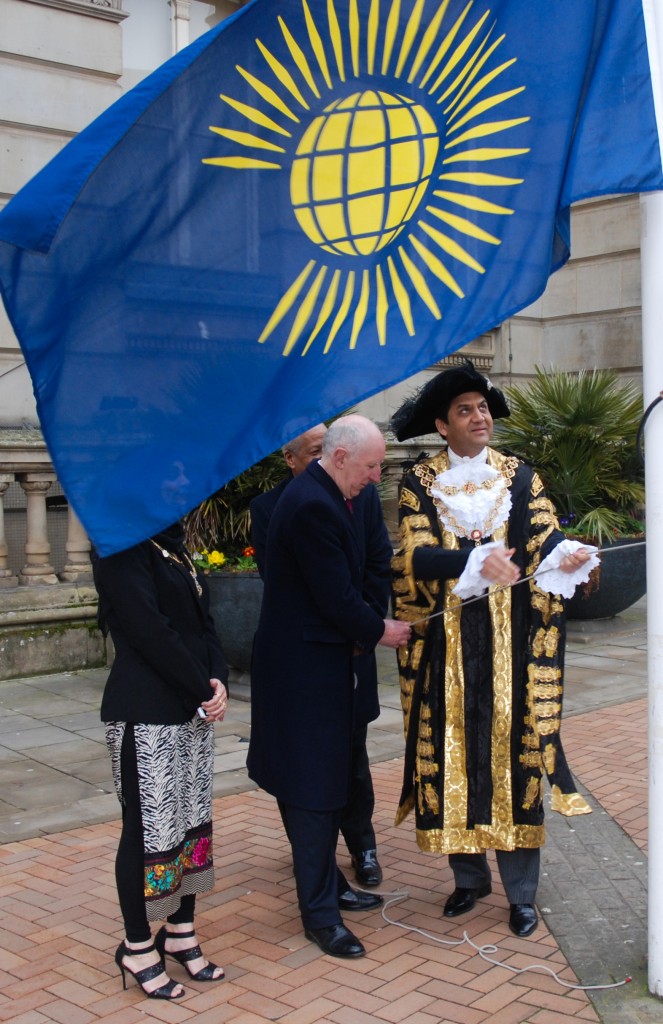 This year’s celebrations of the Commonwealth Day were held on 9 March 2015. Birmingham Commonwealth Association led a vibrant programme of events which started with a flag raising ceremony in front of the Council House. Commonwealth flag was raised by the Lord Mayor of Birmingham, Cllr Shafique Shah accompanied by the Chairman of the Birmingham Commonwealth Association, Keith Stokes-Smith and the Chairman of the BCA Communities Group and Jamaican Consul General, Wade Lyn. After this, all three gentlemen moved to the Birmingham Register Office where the Lord Mayor presented citizenship certificates to 30 of the city’s newest British Citizens. This year’s theme, A Young Commonwealth, served to recognise the contribution and potential of young people, as the majority of the Commonwealth’s population are aged under 30. This theme is particularly important to Birmingham, as we are a young city with more than 45% of our residents aged 29 or under.

In light of this occasion, the Leader of Birmingham City Council, Sir Albert Bore said: “Birmingham is a truly international city with 187 nationalities represented within its population, so it is appropriate it should celebrate our citizens’ achievements and heritage on Commonwealth Day.” He added, that “like its growing population of students and young professionals, Birmingham has ambitions and it seeks to achieve those by working with its many international partners, including many members of the Commonwealth.”

In the evening, the Birmingham Commonwealth Association organised a networking dinner at the University College Birmingham to celebrate the city’s relationship with its Commonwealth international partners. The dinner was attended by over 50 guests, including Sir Albert Bore and Paul Sabapathy, the Lord Lieutenant for the West Midlands. Chairman Keith Stokes-Smith remarked that it was a “special day” and an opportunity to bring together the three ‘Focus Groups’ of the Commonwealth, Trade and Business, Communities and Education. He said: “The Association is all about ‘outcomes’ resulting from engagement, partnership and collaboration with our Commonwealth colleagues and Greater Birmingham to the benefit of them all. The Commonwealth is a family of nations with great potential to further build upon its common history and values.”