Birmingham based International Synergies listed as global inspiration on the circular economy, 18 February 2015

The case study on NISP is available on the newly launched website, www.govsgocircular.com which highlights initiatives from around the world that stimulate the transition towards a more circular economy, and which are initiated or supported by regional institutions, national governments or local authorities. See screenshot from the website below: 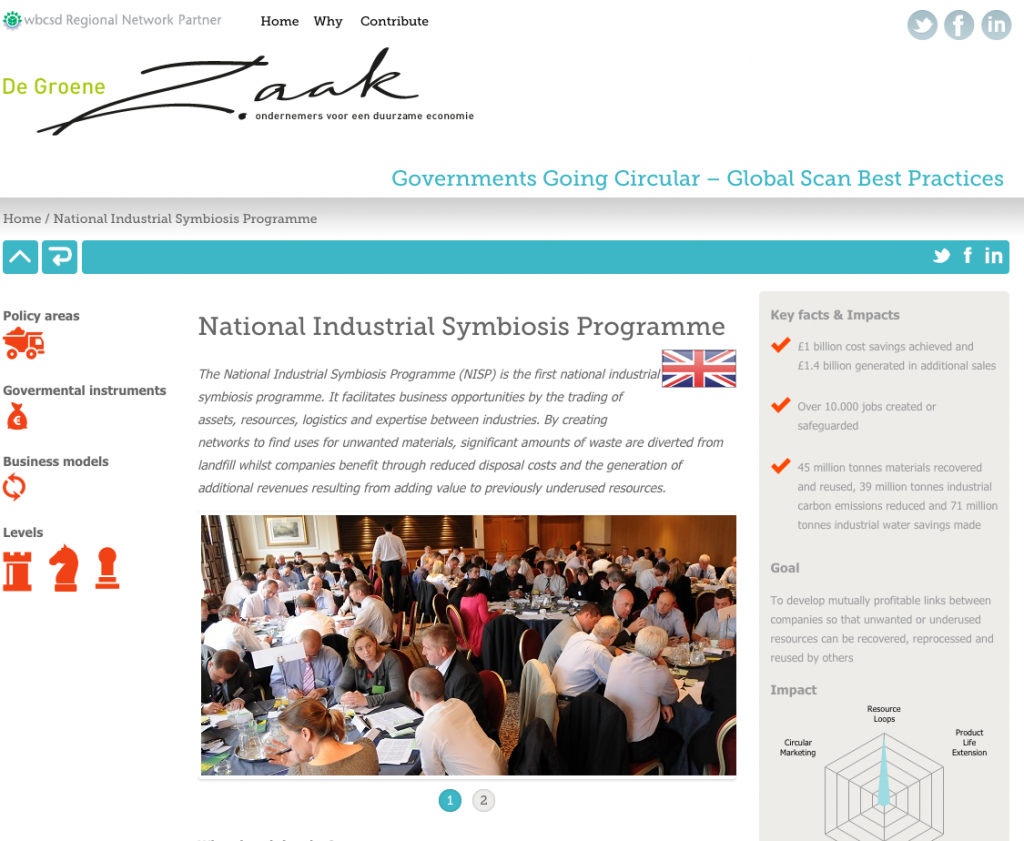 International Synergies, based at Kings Norton Business Centre in the city, is the world’s leading expert in the application of industrial symbiosis, having implemented many ground-breaking projects over the last decade, successfully exporting its approach to more than 20 countries.   The company’s industrial symbiosis approach was first piloted in the West Midlands in 2003.  The project proved such a success that it grew to become the National Industrial Symbiosis Programme (NISP) in 2005.  NISP has subsequently won many awards and accolades, including being acknowledged as a world-wide exemplar of eco-innovation.

The website includes inspiring examples, such as NISP, and aims to encourage governments worldwide to replicate them.  In addition to the global scan of best practice examples on the website there is also an accompanying report on the findings from De Groene Zaak, with support from partners Accenture, EY, IMSA and Royal Haskoning DHV.

During the global scan of activities they found that governments are particularly active in waste reduction and resource optimisation programmes.  However in many cases the government’s own procurement power is largely unused and the vast majority still lack a clear sense of urgency to move towards a circular economy; initiatives are found in a limited amount of countries and areas.

The accompanying report also showcases the Western Cape Industrial Symbiosis Programme (WISP) which is managed by the GreenCape with capacity building support from International Synergies and the work of the L’Institute de l’economie Circulaire, partners in NISP France alongside International Synergies Limited and Ademe (French Environment Agency) which will be launched in the next few weeks.