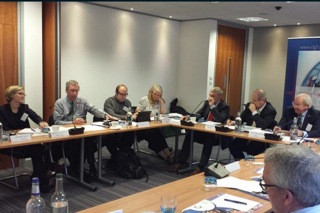 Local government experts met in Edinburgh on 28-29 October to look at devolution and decentralisation challenges faced by councils in European countries that are part of the Commonwealth.

The Confederation of Scottish Local Authorities kindly hosted the recent CLGF European members meeting. This event comprises the annual coming together of local and national government representatives from the Cyprus, Gibraltar, Malta and the UK as well as senior staff of the CLGF.

The meeting chaired by Mayor Lazaros Savvides, President of the Union of Cyprus Municipalities and CLGF Board member came at a critical time for devolution following the recent referendum on independence in Scotland. The meeting focused on Decentralisation and Devolution: Lessons from Scotland and Europe. With an emphasis on cities it provided an opportunity to share differing approaches and experiences on the increasing role of cities and how they learn from each other.

Birmingham City Council`s presentation highlighted the practical benefits to be gained from its engagement with counterparts at local, national, Commonwealth and other international levels. CLGF members were interested to hear of Birmingham`s youth engagement with Johannesburg; teacher training experiences with Bangladesh, India and Sri Lanka as well solid waste management collaboration with Aurangabad, Maharashtra.

The establishment of Birmingham`s Commonwealth Association was also well received. It is hoped Birmingham`s overall Commonwealth related activity will be highlighted at the CLGF Biennial Conference in Botswana in June 2015.