Birmingham calls for a stronger role for cities in EU policy making, 8 October 2014 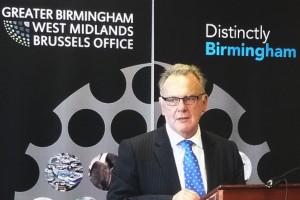 Birmingham has called for the European Union to more effectively engage cities in EU policy making and for cities to be given greater powers over EU funding to deliver on local priorities, whilst also to contributing to the EU’s growth goals.

Speaking at an event hosted by Birmingham’s Brussels office on 8 October, Sir Albert Bore, Leader of Birmingham City Council said: “In our view, a new EU Urban Agenda needs a framework to more effectively engage, include and empower Europe’s cities and regions.”

Sir Albert added that: “This office is a living example of the type of partners required to deliver on Europe’s key challenges. I am delighted to say that we have one of Birmingham’s most successful companies located in this office, Jaguar Land Rover, who is also a key strategic partner of ours back at home. At the other end of the size chart we have a small but innovative SME, International Synergies Ltd, who are world-leading on innovative solutions for waste and resource efficiency through industrial symbiosis. We also have six university partners here including three Birmingham universities (Birmingham, Aston and Birmingham City University) and three from the wider territory in Keele, Staffordshire and Warwick. These are key partners in the research and development agenda and key to developing successful integrated urban development. Similarly, we have partners here today from our High Value Manufacturing Catapult who will be instrumental in supporting growth within key growth sectors such as advanced manufacturing.”