5 colleagues from Berlin describe their work-shadowing experience in Birmingham, 2 October 2014

For four weeks in September, Birmingham City Council was hosting five Officers from different District Councils of Berlin, Germany. Their placements were funded by the Lifelong Learning Programme of the European Union, which enables individuals at all stages of their lives to pursue stimulating learning opportunities across Europe.

Sonja Eichmann, Officer for European and International Affairs in the Berlin district of Treptow-Köpenick

Sonja Eichmann, Officer for European and International Affairs in the Berlin district of Treptow-Köpenick worked with European and International Affairs Team. “I was relieved and glad to meet open-minded and kind people who took time to explain everything, to share their knowledge and experience with me. I am very impressed that the City of Birmingham has a focused European and International Strategy. It shows clearly why it is important to be engaged with countries in Europe and across the world, what the objectives are and how they should be achieved. This is something the District Councils in Berlin could adopt. I think Birmingham and Berlin have a lot in common and both cities would benefit from a closer collaboration.” 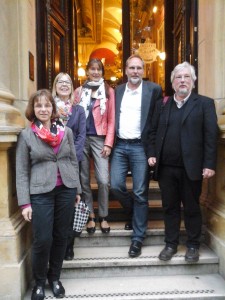 Her colleague, Olaf Oesterreich, Tree Service and Maintenance Manager from Berlin district Steglitz-Zehlendorf had a chance to experience how the Tree Team of ‘Parks and Nature Conservation’ in Birmingham is working. “I’ve had an experience rewarding and fulfilling by shadowing the tree officers, learning for example about a GPS supported computer program, surveying trees, working on enquiries, meeting with park rangers, contractors, friends groups and getting to know some of the most beautiful parks and cemeteries.”

Monika Birth, social worker in the youth welfare office in the Berlin District Tempelhof-Schöneberg was shadowing the colleagues in the children´s service in Dyson Gardens Children’s Centre Birmingham. “I’ve got a very good general idea of the structure of this service and how child protection and support for families is ensured.”

Another colleague, Jutta Christmann from Berlin district Charlottenburg-Wilmersdorf had the possibility to visit several Primary and Secondary schools. “I appreciate the large number of members of the non-teaching-staff at these schools. I like the idea of focusing on the young persons’ education as one of the most important subject matter in their lives and to offer them the appropriate support to be successful at school.”

Bernd Weissenow from the planning department of the Berlin district Pankow worked with BCC planning and got to know about Birmingham city planning and development. “In some cases I found similar things in planning as we do in Germany but also very different ways.”

Concordantly, all five of them found their work-shadowing an enriching and unforgettable experience.