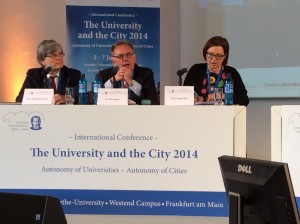 In the context of the strategic partnership between the University of Birmingham and Goethe University, Frankfurt, a delegation from Birmingham is participating in this year’s University and the City Conference.

The main aims of the conference are to investigate interrelations between higher education institutions and their urban locations in an interdisciplinary context. This year’s conference includes all of Goethe University’s international partners and their city administrations.

The University of Birmingham and Goethe University partnership was set up in the context of them both being civic universities in sister cities. The focus is on developing joint teaching and research work in a number of academic areas.

The University of Birmingham will be represented by Professor Michael Whitby, Pro-Vice-Chancellor, and Professor Jenny Philimore from the Institute for Research into Superdiversity. Prof Philimore will also be chairing a session on civic involvement and engagement.  Sir Albert Bore, Leader of Birmingham City Council, will also be a guest speaker at a closing reception hosted by the Mayor of Frankfurt.