HM Consul General to Chongqing gets to know Birmingham 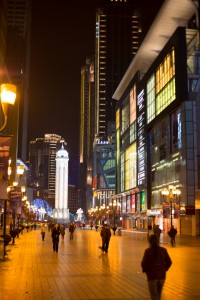 “Chongqing central” by Lauri Väin used under CC BY 2.0

The British Consul General to Chongqing will be visiting Birmingham next week to familiarise herself with the city’s economic landscape, trade and investment offer. However, Tina Redshaw [bio below], who took up the post at the end of last year in the Chinese mega city of Chongqing is not a complete stranger to Birmingham. She has already supported the city during the visit by Sir Albert Bore to south west China last year to meet with a large automotive manufacturer looking to invest in the UK.

The visit next week followed from an invite from the City Council for Tina to visit the city and get a feel for what we have to offer Chinese investors. There are a number of emerging Chongqing/Birmingham links with Aston University, Innovation Birmingham, Birmingham Airport and the industrial symbiosis company Industrial Synergies, which are all part of a packed visit schedule.

Tina Redshaw took up her position as British Consul-General in Chongqing in November 2013. Tina worked at the British Embassy in Beijing between 2000 and 2003 as First Secretary and again from 2007-2010 as Head of Environment, Infrastructure, Energy in the Commercial Section. From 2003-2007, Tina was Her Majesty`s Ambassador to Timor-Leste.

Prior to joining the Foreign Office in 1999, Tina had worked for the UK`s international volunteering organisation VSO, initially as Country Director for China and Mongolia, and subsequently as Regional Director for Southeast Asia.

Tina has a degree in language and linguistics from the University of York and a Masters Degree in International Development Management from the Open University.

Tina is accompanied in China by her daughter. She enjoys listening to a wide range of music, visiting the theatre and watching dance performance and exploring wherever she lives by bicycle and foot.