Institute for German Studies presents exhibition on the history of Europe 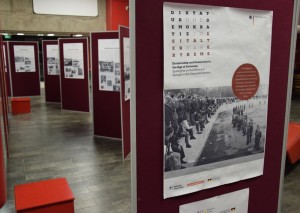 It is the last week of the Institute for German Studies’s (IGS) current exhibition on the history of dictatorship and democracy in twentieth-century Europe. In partnership with the Bundesstiftung zur Aufarbeitung der SED-Diktatur, Berlin (Federal Foundation for the Reappraisal of the SED (Sozialistische Einheitspartei Deutschlands, Social Unity Party of Germany) Dictatorship), the exhibition is being staged at the University of Birmingham’s Muirhead Tower building from Monday, 5th May to this Friday, 16th May. It uses 26 large-size posters to present almost 190 photographs, images and texts from numerous European archives which portray Europe’s 20th century as a dramatic history of the struggle between freedom and tyranny, democracy and dictatorship. This century sees major anniversaries of events which have shaped Europe as we know it today: the 100th anniversary of the outbreak of World War I in 2014, 75 years since the beginning of World War II, 25 years since the German ‘Peaceful Revolution’ of 1989 and 10 years since the eastward enlargement of the European Union.

“Dictatorship and Democracy in the Age of Extremes: Spotlights on the history of Europe in the Twentieth Century” is open to interested members of the public from 9.00 am to 5.00 pm until Friday, 16th May.

Students, school groups and their teachers are invited to attend introductory talks on the exhibition and the history it represents. The last school session takes place on Wednesday, 14th May from 2.00 pm to 3.00 pm. Registrations can still be made until 1.00 pm on Wednesday via email to ivormbolton@googlemail.com.