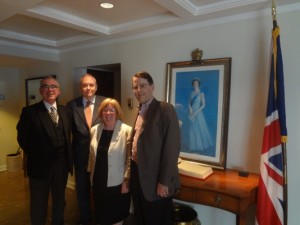 Councillor Mike Leddy, Lord Mayor of Birmingham, has just returned from a visit to Washington and Chicago. His visit focused on the showcasing of Birmingham’s culture and progressing our Sister City relationship with Chicago.

In Washington the Lord Mayor accompanied the Birmingham Contemporary Music Group for its first ever residency at the prestigious Coolidge Auditorium, US Library of Congress. He attended the BCMG’s opening performance highlighting Birmingham’s acknowledged status as a leading force in contemporary music. The performance was well received in what is BCMG’s 25 anniversary year.

From Washington the Lord Mayor travelled to Birmingham’s Sister City of Chicago. For 30 years the two cities have engaged in common interests and challenges learning from each other how best to make their cities the places where people want to live, work and study. To complement an ongoing programme of collaboration between the cities the Lord Mayor visited Gallery 37; World Business Chicago; and Birmingham counterpart primary and secondary schools. He also met Chicago Deputy Mayor Steven Koch and UK Consul General Steve Bridges.