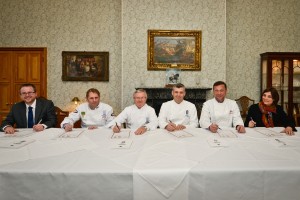 The official signing of the memorandum was followed by the national “Chef of the Year” competition at University College Birmingham. Chefs from both the British Culinary Federation and Les Toques Blanches Lyonnaises featured on the panel of judges.

Birmingham’s culinary connections to its partner city of Lyon also include being the only UK member of Délice, an international network of 20 cities founded by the City of Lyon which promotes the benefits of culinary excellence and food tourism promotion.