A number of internationally significant conferences, debates, events and film screenings around the topic of climate change have been taking place at Millennium Point this March.

At the Climate Change Conference – China-Europe 2020 Smart Low Carbon Cities & Technologies earlier this month participants had the opportunity to discover the latest information on cities and business opportunities associated with low carbon buildings, energy and transport technologies. This year’s 10th International Hydrogen and Fuel Cell Conference on 25th March included presentations and exhibitions from national and international companies focusing on fuel cells and hydrogen for future transport and buildings. The upcoming Flatpack Film Festival on 28th March will transform Millennium Point into the 1972 environmentally-themed American science fiction film Silent Running. Flatpack have programmed 25 short films on the theme of climate change for the atrium screen.

Within the framework of the EU’s HORIZON 2020 programme, it has been planned to allocate a budget of more than 1 billion euros over six years to issues surrounding climate change, combining both industry and EU funding. 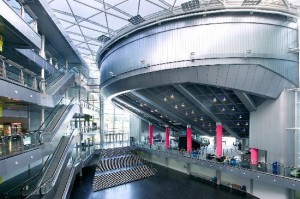 “We think that it is vital that Birmingham becomes a part of the international conversation around climate change which is why we have brought together a month of creative thinking and activity in Millennium Point’s spectacular spaces, working with regional, national and international partners,” said Philip Singleton, CEO of Millennium Point.

Millennium Point is situated at the centre of Eastside, Birmingham, and right next to the City’s first central park – Eastside City Park. It is home to both the Thinktank science museum and The Giant Screen cinema.

Furthermore, it houses the faculty of Technology, Engineering and the Environment as well as the School of Acting of Birmingham City University. The fashion and design studios of Birmingham Metropolitan College are also located at Millennium Point.