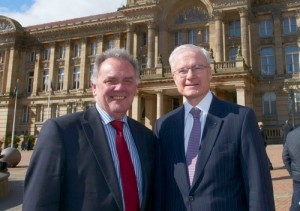 Sir Albert Bore, Leader of the Council, welcomed the French Ambassador, His Excellency Bernard Emié, on his first visit to Birmingham today (21 March).

Mr Emié, who was appointed in April 2011, met with Sir Albert at the Council House where they discussed French business interests in Birmingham and the West Midlands.

France is the third largest investor into the West Midlands, behind the US and Germany, in terms of projects and new jobs creation.

Sir Albert said: “It was a great pleasure to welcome the French Ambassador on his inaugural visit to Birmingham. This first visit was a great opportunity to underline the importance of the relationship between Birmingham and France.

“France is a major investor in the region, with 228 businesses in the West Midlands, including 62 in Birmingham and Solihull alone. Having recently returned from MIPIM property showcase in Cannes, there are already strong business links which I look forward to building on in the future.”

After their meeting, Mr Emié joined the Lord and Lady Mayoress of Birmingham for lunch at University College Birmingham (UCB), where he met students involved in food and hospitality courses.

They were joined by Professor Ray Linorth, Principal of UCB, Neil Rami, chief executive of Marketing Birmingham, and Adam Bennett, head chef at Simpson’s restaurant who represented the UK at the prestigious Bocuse d’Or competition in Lyon last year.

The ambassador also visited the UK headquarters of Legrand, a French electrical equipment manufacturer, in Hockley. Their equipment, such as cabling and wires, has been used in the construction of the Library of Birmingham and the redevelopment of New Street station.

Mr Emié was then shown around the new library before returning to London.