Birmingham was successfully re-elected to the positions of EUROCITIES Secretary and Environment Forum Chair for a further 12 months at the EUROCITIES AGM on 29 November in Ghent.

Birmingham is one of 12 cities which form the EUROCITIES Executive Committee. Warsaw (President), Nantes (Vice-President), Ghent (Treasurer) and Birmingham (Secretary) were all re-elected to their respective offices for a second and final term. As Secretary, represented by Councillor Sir Albert Bore, Leader of Birmingham City Council, Birmingham is responsible for ensuring that the statutes and internal rules of EUROCITIES are adhered to. 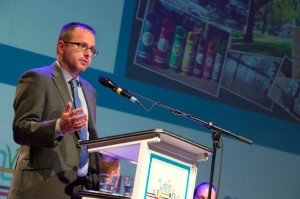 Councillor James McKay sets out the Environment
Forum’s priorities for 2014 at the EUROCITIES AGM. Photo by the City of Ghent

Cllr James McKay, Cabinet Member for a Green, Safe and Smart City, Birmingham City Council, will also continue as the lead for the EUROCITIES Environment Forum on behalf of Birmingham.

He said: “Birmingham’s re-election means the city will be in the driving seat when it comes to ensuring the quality of life is improved for Brummies and many other people across the continent.

“If we get our approach to environmental matters joined-up at a European level, the local benefits are enormous. Jobs in the emerging green economy will be created, fuel poverty will be cut, and the general environment will be a better place in which to live.

“I am looking forward to the year ahead with enthusiasm and hope we can keep up the momentum we have gained over the last 12 months.”

The city’s first year as chair saw key developments and contributions on European air quality standards made to the European Commission, along with work on vehicle noise and emissions.

Additionally, the Forum also ensured that the EUROCITIES voice was heard in the United Nations climate negotiations in Warsaw on 20-21 November.

In the coming year, the Forum will continue to argue the role of cities as key drivers of sustainable development across Europe. The priorities agreed for 2014 include energy efficiency, climate change adaption and resource efficiency.

All of these priorities are linked to green growth to provide new job and investment opportunities – cornerstones of the Birmingham Green Commission’s Carbon Roadmap, which outlines how the city will cut carbon emissions between now and 2027.