£2b investment deal with China to boost Birmingham’s economy

With Prime Minister Theresa May visiting China this week for the G20 summit, the spotlight has fallen on the big potential for Chinese investment in major UK projects. Council leader Cllr John Clancy is on a week-long trade mission to China and Hong Kong, where he is looking for big-money investors to build houses and create jobs across the city. He has declared Birmingham open for business after signing an agreement worth up £2 billion to Birmingham’s economy with the Chinese property development company Country Garden.

The council leader signed a joint statement of investment commitment with the Guangdong-based company today. Initially, Country Garden will explore large scale investment opportunities in the Birmingham city region, with a particular focus on regeneration and investment options related to the HS2 project as well as working jointly to find areas of collaboration with regard to delivering significant new housing stock in Birmingham city and the surrounding area. 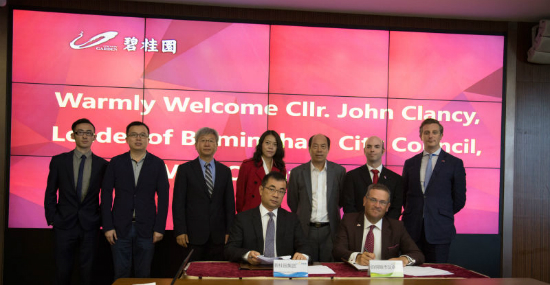 Cllr Clancy backs this agreement and refers to Country Garden’s proven track record as developers that have played a major role in China’s economy over the last 20 years. As a developer, the company has met both the demands of China’s rapidly expanding economy as well as the demands of a young, growing Birmingham. “Bringing this level of investment and experience to Birmingham would be a massive economic boost to the region’s businesses, skills base and families. It’s about bringing new, big capital to the city, quickly. This is about building houses, jobs and futures for young Brummies and families across the region.”

Country Garden founder and Chairman Mr Yang Guoqiang is delighted at the opportunity of investing into the city’s infrastructure and development. He has been “impressed with Birmingham’s ambition and huge potential”.

Chief executive of the Greater Birmingham Chambers of Commerce, Paul Faulkner, has welcomed the announcement by emphasising the importance of Birmingham’s presence on global capital markets for acquiring global investors, particularly post-Brexit. Like Cllr Clancy, Faulkner is certain of the agreement’s major economic impact across the region for Birmingham companies and the construction supply chain as well as for Birmingham’s relationship with the “all-important China market”.