Year 2016 marks the 10th anniversary of the partnership between Birmingham and Guangzhou cities. 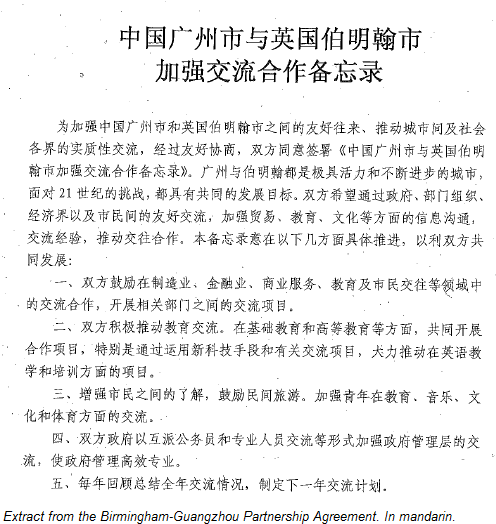 The recent years of collaboration between Birmingham and the Chinese city have been intense, with some increasingly important academic, medical, research and business links established.

During ten years of formal partnership, Guangzhou has become key city for outbound investment into the Greater Birmingham region with investments and contributions.

Following the sister city agreement, the University of Birmingham established a full time office in Guangzhou. Business links continue to grow between the two cities as several companies open their offices in Guangzhou and schools of both cities engage in a series of activities around the English language and teacher training.

Birmingham City Council has contributed to this partnership helping to train over 200 of Guangzhou Municipal Government’s civil servants in cooperation with the Institute of Local Government Studies at the University of Birmingham and several other programs that are expected to continue in time. In addition to this, Birmingham City Council and partners are planning further cooperation within the sports and culture sectors with Guangzhou contributing to Longbridge Light Festival run by the EC Arts.

As part of the long standing relationship between the Library of Birmingham and its Chinese equivalent, the Library of Guangzhou, an exchange of photographic exhibitions will be presented in both cities. Birmingham will display 150 years of photography documenting many Guangzhou sites and landmarks, from the first photographs taken during the Anglo-French North China Expedition of 1860 to this day.