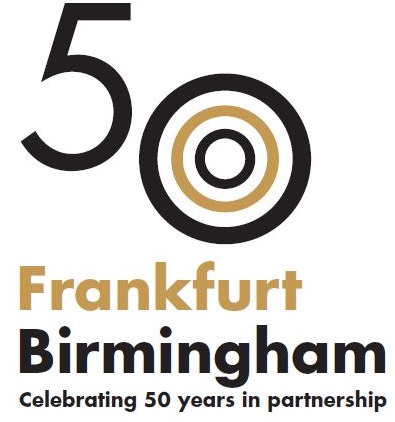 Birmingham and Frankfurt became formal partner cities in 1966. This year both cities will be celebrating the 50th anniversary of our partnership and a number of events have been planned jointly with the City of Frankfurt and Frankfurt based organisations to celebrate the occasion.

With the signing of the Frankfurt-Birmingham Partnership Agreement in 1966, began an unprecedented period of collaboration between both cities that has resulted in numerous joint projects, initiatives and collaborations.

Certainly the most visible of these is the annual Frankfurt Christmas Market the city hosts since the year 2000, which has quickly become the largest authentic German Christmas Market outside Germany and Austria. Every year the market offers a wide range of genuine German products and is visited by millions of people. Last 2015 alone, the Frankfurt Christmas market was the destination of over five million visitors. 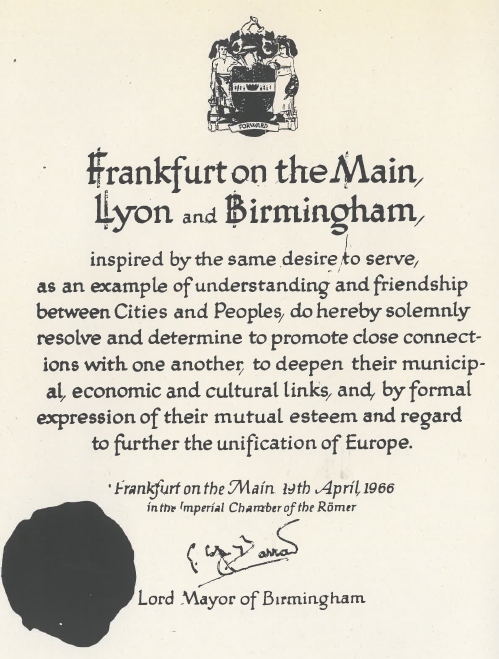 The 50th anniversary will serve to highlight the existing areas of collaboration and strengthen joint endeavours between the two cities, such as the partnership between the University of Birmingham and the Goethe University, the mutual collaboration within the Climate Knowledge and Innovation Community, and of course the above mentioned Frankfurt Christmas Market among many others.

Birmingham City Council is also working with its partners in Frankfurt to capitalize upon the opportunity offered by the anniversary to instigate new forms of co-operation.

Several events are planned with culture and arts organisations from both cities for the summer and autumn periods. Collaborations and exchanges will culminate in November with a German Week at the Library of Birmingham and an Anniversary Gala, that will be held in the Council House the 18th of November with the attendance of the Mayor of Frankfurt and the German Ambassador to the United Kingdom.

The calendar of events programmed for the anniversary can be found here.