The EU-China Urbanisation Partnership Forum took place on 29 June in Brussels, on the day of the 10th EU-China Summit.

The EU-China Partnership on Urbanisation is an overarching instrument brought to life to support China and the EU to improve the functioning and attractiveness of Chinese cities, and tackle climate change and environmental issues. This year’s Forum gathered Chinese and European top Government officials, Mayors, local decision-makers, city planners, business and Non-Governmental Organisations (NGOs) willing to share experience in moving towards sustainable, integrated and efficient solutions.

Sir Albert Bore, Leader of Birmingham City Council, took part in the Forum in the “Round table 1: Investing in Cities” panel, along with Zhao Hui, Chief Economist of the Ministry of Housing and Urban-Rural Development, from China and Christopher Jones, the Deputy Director General of DG ENERGY, from the European Commission, where he shared his experience on intelligent urbanisation schemes as a major strategy to mitigate climate change.

Birmingham has three formal sister city relationships with Changchun, which was established as far back as 1983, and also Nanjing and Guangzhou both formalised in 2006. Sir Albert Bore promised in the Brussels Conference to further develop the relationships with these cities and focus on different fields such as investment opportunities, community and academic exchanges. 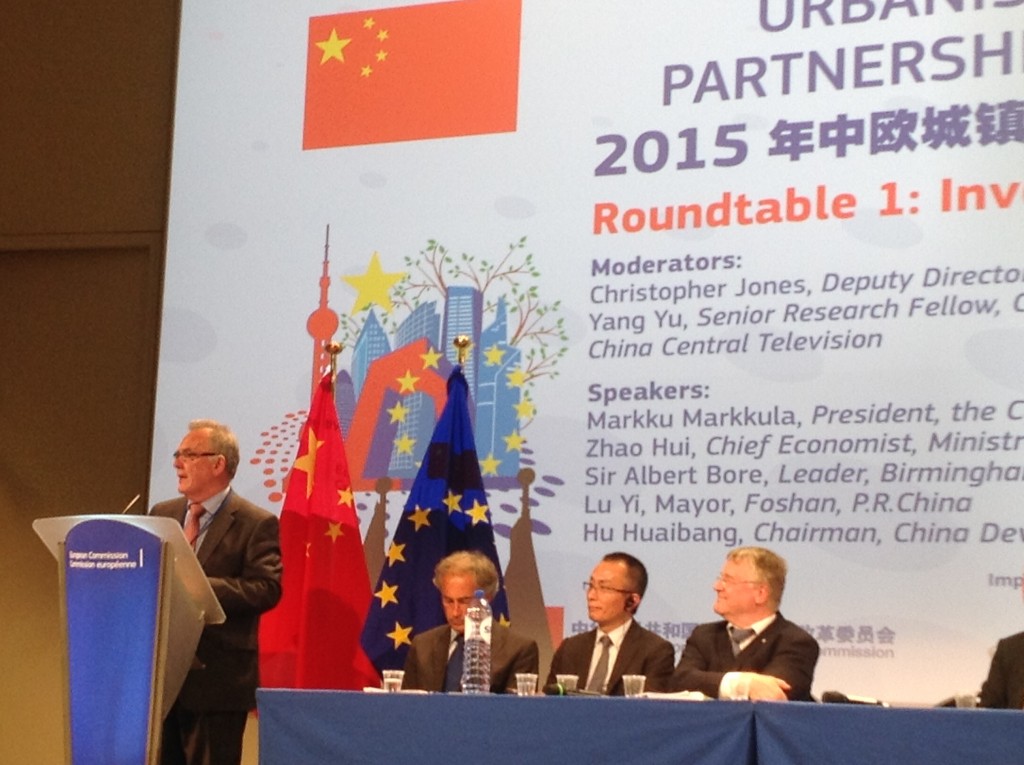 Councillor Bore mentioned several opportunities for the potential investors interested in Birmingham: “We have spent a very successful 25 years restructuring our local economy and diversifying our economic potential as a city. We are no longer reliant on the automotive sector although it remains a key strength. […] Our future plans include Birmingham being home to the new High Speed 2 base and college and will be an important new hub that with connect Birmingham to London in just 40 minutes.”
Councillor Bore then added “We have a thriving tech sector and are developing a new environmental district and new life sciences campus. Whilst our record and history of working with China is a good one, looking forward, there is a huge sense of excitement and recognition that Birmingham is becoming the UK’s number 1 investment location”. He concluded: “I would also highlight that there is an exciting future ahead with regards to growth and investment potential in Birmingham.”