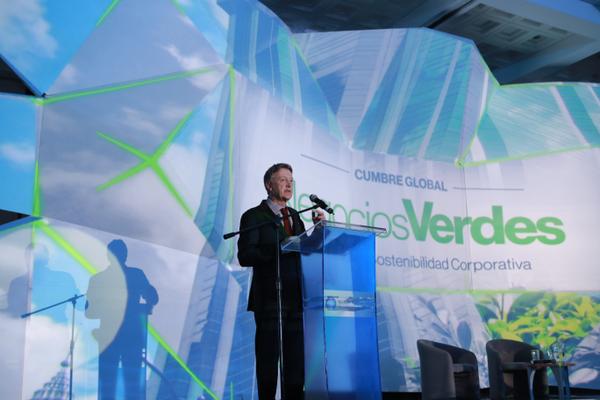 Birmingham based International Synergies took centre stage alongside some of the global leaders in sustainability at the Global Green Business Summit in Mexico last week (27th & 28th April).

Peter Laybourn, Chief Executive of International Synergies, gave the keynote speech at this global event on the topical theme of the Circular Economy.

International Synergies is a world leader in industrial symbiosis (an important tool for the circular economy) having pioneered the National Industrial Symbiosis Programme, initially as a regional pilot in the West Midlands and then as a UK-wide initiative.  The success and impact of NISP in generating economic and environmental benefits has led to International Synergies supporting the implementation of replica programmes in over 21 countries world-wide.  The most recent countries to adopt the NISP model include Egypt and France.

The ‘NISP’ model advocates the practice of industrial symbiosis: instead of being disposed of, waste streams and other under-utilised resources generated by industrial processes are redirected and reused by other companies within a network, typically from different sectors, providing a mutual benefit or symbiosis – the circular economy in action.

The Global Green Business Summit was organised by the EGADE Business School, Tecnológico de Monterrey Global Institute for Sustainability (IGS), and is the 6th of its kind.  The theme of this year’s event was “Corporate Sustainability and Innovation: Growth and Business Competitiveness.”

Peter Laybourn said: “The 2015 Global Green Business Summit showed what business opportunities and new business models are available to help combat climate change and resource scarcity.  There needs to be a profound transformation of the world economy. It was a great honour to present alongside such important figures and I’m delighted that our Birmingham based company, International Synergies, through its industrial symbiosis programmes is having such a global impact.