BE Festival celebrates its fifth anniversary in July 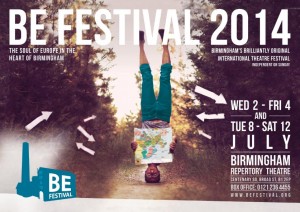 BE FESTIVAL, Birmingham’s festival celebrating the best of European theatre returns to the city and a new home at Birmingham Repertory Theatre this July. Featuring over twenty electrifying performances from eleven European countries, plus live music, exhibitions, workshops, discussions and delicious food, this vibrant festival puts Birmingham on the map as the theatre capital of Europe from 2 – 12 July.

Celebrating its fifth anniversary, this year BE FESTIVAL takes over Birmingham Repertory Theatre, turning the building back to front as festival-goers will be able to step backstage and experience. The REP in an innovative and exciting way. The REP’s set construction workshop will be transformed into a festival hub with a bar for audiences to socialise and the scenic paintshop becomes an interactive exhibition space, while the theatre’s vast main stage will be converted into a pop-up restaurant.

BE FESTIVAL is Birmingham’s European theatre festival, bringing together daring and unforgettable new performances from Spain, Italy, Denmark, France, Hungary and Germany among others. Each night features four 30 minute-long shows with audiences offered the opportunity to eat dinner with the performers in the interval.

For more information on BE Festival please visit www.befestival.org