On 29 October 2013, Birmingham hosted a delegation from Lyon headed by the Mayor of Lyon, Gérard Collomb. Dating back to 1951, Lyon is Birmingham’s longest-standing partner city. 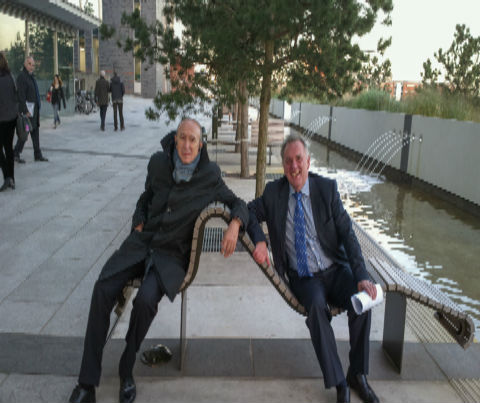 During his time in Birmingham, Monsieur Collomb was shown some of the latest regeneration activity in the city centre such as the Eastside City Park and the new Library of Birmingham. He also visited Bournville College for a preview of the Fête des Lumières installations which included three light installations from Lyonnais artists to mark the College’s centenary.

He also had the opportunity to meet the Chef Patron of Simpson’s restaurant, Andreas Antona, in the presence of the Lord Mayor and Lady Mayoress.  Earlier in 2013, a team of chefs from Simpson’s competed in the world renowned and highly competitive Bocuse d’Or culinary competition hosted in Lyon. The team secured the best result the UK has ever had, finishing fourth overall, winning the prize for the best meat dish, and also collecting the Best Commis chef prize – the first time that this has been awarded to a UK competitor.

Both cities also took the opportunity to discuss how they can work more closely to develop their links with Guangzhou in China, with whom they are both have a formal partnership, and closer co-operation on the innovation agenda.